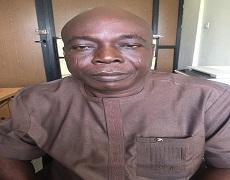 He joined Federal Environment protection Agency which was later transformed into Federal Ministry of Environment in 1998 as a Senior Environmental Scientist (SES). He was redeployed as a pioneer member of staff of National Oil Spill Detection and Response Agency in 2006 as an Environmental Scientist. He was moved from the Planning Department of the Agency to start the Public Procurement Unit in 2008. He rose to become the Director of Procurement from 2018 till date.

He has attended several training, workshop and seminars both in oil spill management and public procurement in Nigeria and Overseas.

He is married with four children.