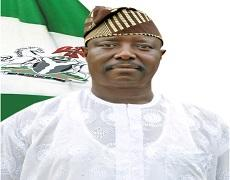 Idris Olubola Musa was born on September 17, 1957 in Yagba East Local Government Area of Kogi State of Nigeria. He holds a Bachelor of Science (B.Sc.) in Geography from the Prestigious University of Ibadan. He also holds two Masters Degrees in Business Administration (M.BA) as well as Urban and Regional Planning (M.URP) from the University of Ilorin and University of Ibadan respectively, as well as several Professional Certifications and Memberships locally and internationally.

He has about 40 years of experience in different capacities in both the private and public sectors. He started his career in 1980 as Executive Director (Operations and Accounts) in Oluyori Bottling Industry Nigeria Ltd., Isanlu where he later moved to Virgven Nigeria Ltd., Ilorin as Executive Director (Management Consultancy) in 1989. In 1996, he joined the public service as Environmental Scientist in the defunct Federal Environmental Protection Agency (FEPA) and later to Federal Ministry of Environment where he was deployed in 2004 as one of the pioneer staff to head the Oil Spill Detection and Response (OSDR) Department of the then newly established National Oil Spill Detection and Response Agency (NOSDRA). He was promoted to the level of Director in 2008 in NOSDRA and Director Oil Field Assessment in 2011 following departmental restructuring in NOSDRA.

Mr. Musa retired in this position in NOSDRA in September, 2017. Being a vibrant and energetic personality, he was appointed as Head of Operations of the Hydrocarbon Pollution Remediation Project (HYPREP), Port Harcourt in the same year. He was appointed Director General/Chief Executive of the National Oil Spill Detection and Response Agency (NOSDRA) in March, 2019 by the President, Federal Republic of Nigeria, President Muhammadu Buhari (GCFR).

Mr. Idris Musa has an uncommon wealth of experience in oil spill management. He also served in several committees amongst which is the Committee that worked on the preparation of documents leading to the establishment of NOSDRA. He also worked on several projects and researches leading to several developmental achievements in Nigeria which are quite numerous to mention here. He has also attended several international trainings, seminars and workshops.

He represents Nigeria on the Ten-Man Board of Pollution Crime Working Group of the International Police (INTERPOL).