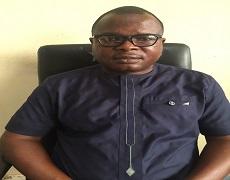 Educated at the university of Ile-Ife (Now Obafemi Awolowo University) from 1981-1985 and 1986-1987, where he graduated with a B.Sc. (Second Class Upper Div.) and M.sc respectively in Geography.

He began his public carrier in December 1987 at the then Bendel state University, Ekpoma as an Assistant Lecturer and rose to the rank of Lecturer 1 before joining the defunct Federal Environmental Protection Agency in 1997. He was pioneer member of staff of the federal Ministry of Environment. From the Ministry of Environment, he transferred to the National Oil Spill Detection and Response Agency as the Acting Director and later Director of Assets’ Safety and Mitigation Department.

He has attended seminars, training and workshops on many aspects of Environmental Management. A member of the Nigerian Environmental Society (NES); Leadership Environment and Development (LEAD Fellow) among others.

He is an ardent lover of tennis and a member of Board of Trustees of City Sports Club, Abuja.

He is married with Three Children.